2 PIANOS 4 HANDS IS THE RIOTOUS TALE OF TWO BOYS IN CANADA, TED AND RICHARD, SHARING THE SAME GOAL: CONCERT PIANIST STARDOM. THEY WORK FERVENTLY TOWARDS THEIR DREAM AMIDST PUSHY PARENTS, ECCENTRIC TEACHERS, HOURS OF REPETITIVE PRACTICE, STAGE FRIGHT, THE AGONY OF COMPETITIONS AND THE DREAM OF GREATNESS.

Two actors, two pianos and many, many characters grace the stage as fifteen years of learning the art of piano playing unfolds. From classical to pops to jazz, the play provides the chance for two performers to give their all in a 120-minute virtuoso performance. Along the journey the actors/pianists portray a dazzling range of characters embellished with a show of piano wizardry featuring the music of Bach, Beethoven and Jerry Lee Lewis.

In the beginning, the actors take turns playing child versions of each character while the other assumes the role of the teacher, the adjudicator, the parent. As “friendly” competitors nearing their teens they face off at various festivals – experiencing stage fright and the dread of losing to eight year old prodigies. And as young adults, their eyes open to new ideas and influences. Seamlessly, their piano playing and perspectives on the world evolves. From The Birch Canoe they move to auditioning for Conservatories, playing the music of classical and jazz masters, facing conflicts with their parents, and sometimes thinking about the opposite sex…And as they mature, Ted and Richard become more aware of the gap between the very good and the great, and come to the humbling realization that greatness may be out of reach. And there lies the universal plight of all those with an ounce of training and talent and the will to “be” a professional musician, or athlete, or actor, or dancer.

2 Pianos 4 Hands captures the humour that comes with learning to play the piano, and the sense of loss of eventually learning to let go of the dream.

2 Pianos 4 Hands is Available for Touring

"Their show is more than a routine, it’s a dramatic gem. '2 Pianos 4 Hands' is funny, clever, insightful and touching, full of music, humour, story and character."

The Globe and Mail

"Not a sour note. Not a lost chord. Not a misplaced phrase."

"A shining '2 Pianos 4 Hands' is about the rigors of mastering the instrument, but it's for anyone with a dream."

"This joyful, playful and invigorating piece is precisely what our summer audiences love -- great music, great performances. It draws in audiences from all walks of life; from people of 8 to 84. It was such a crowd-pleaser last year, that we were thrilled to welcome it back to Hartford Stage this summer."

"Vigorous and amusing, the show has been performed around the world, in dozens upon dozens of cities...a ready-made Marquis Entertainment production that gleams like the polish on a grand piano."

"Is it a concert, a piano lesson, a play, a musical or a comedian act ? This show is all of the above. The two pro pianists embark us in a tragi-comedy with jokes that fly like the rhythm of an accelerated metronom."

★★★★ (out of 4)
"Magical! Superb! Laugh-out-loud funny! Poignant! Perfection! This is the last time that '2 Pianos 4 Hands' is coming our way before Ted Dykstra and Richard Greenblatt retire the show. Don’t miss these farewell performances."

The Globe and Mail Paula Citron

"A concerto of musical mayhem"

"Simple, charming, funny, brilliant. A wonderful showcase for Toronto talent. Something we can really be proud of."

"2 Pianos, 4 hands …no …wait …there were hundreds of hands, and all of them were applauding ….LOUDLY!"

"Tremendous! '2 Pianos 4 Hands' has been in constant production for sixteen years because it's a sensational two man show. Dykstra and Greenblatt are a hilarious comedy team with effortless charm. The show captures magnificently the joy and the anguish of being gifted.... but just maybe not enough."

"A show that celebrates so strongly not just music but optimism triumphing in the face of disappointment...You’d be hard-pressed to find a better way to start the New Year."

"An international smash…catch them while you can."

"Extraordinarily entertaining…will speak to anyone who's had a dream."

"While many of the pieces are played seriously, the show is anything but; take-offs, pastiches and routines in the style of Liberace and Borge abound, as do hilarious one-liners. After all, this is primarily a piece of theatre, and what it offers is a razor-sharp insight into the world of training and competition"

"Anyone who has ever taken a piano lesson, or, much more significant, ever simply encountered some kind of career or life disappointment and moved on, can identify with their story, chuckle and have a great time. The show delights on two levels - you might empathize on both or merely on one. It doesn't matter. It should hit you on the ironic funny bone of self-identification." 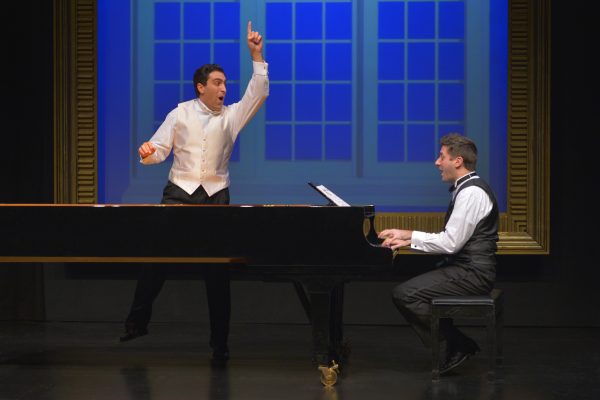 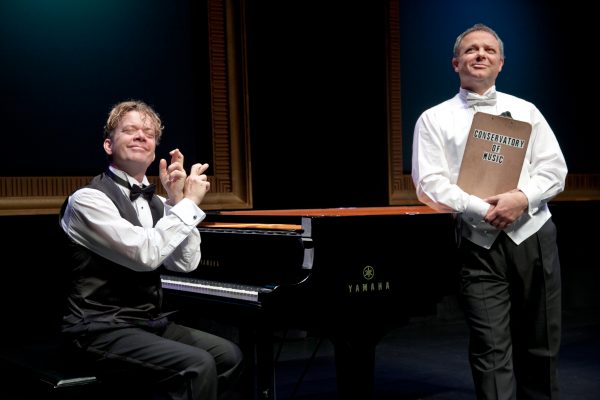 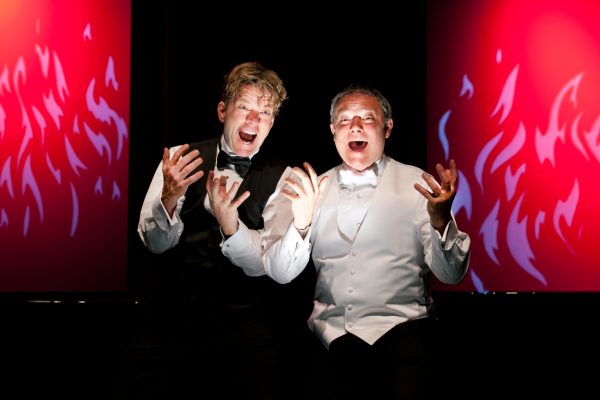 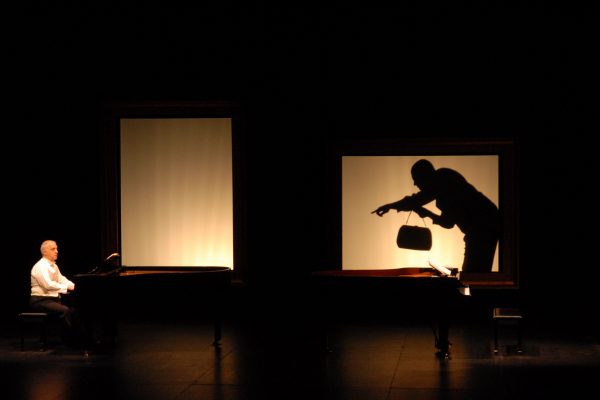 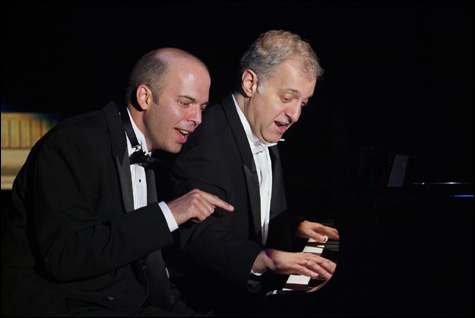 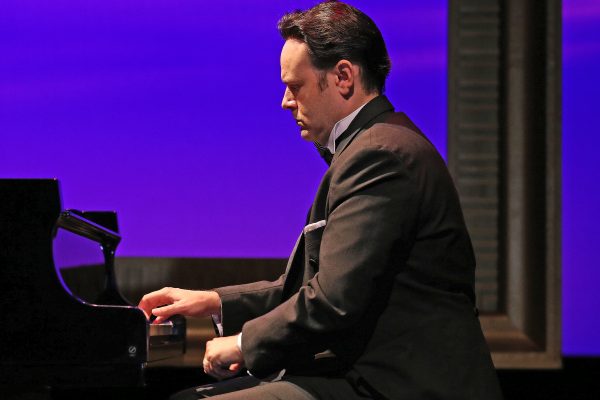 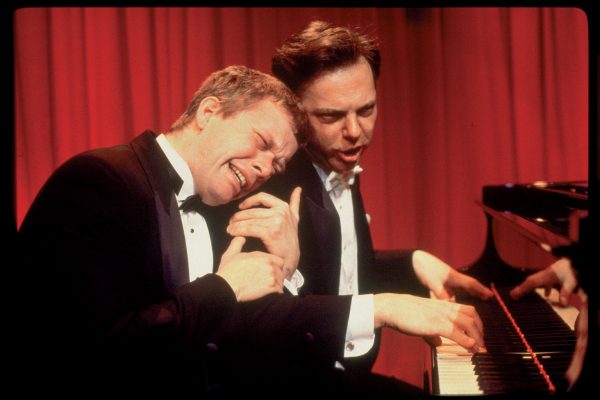 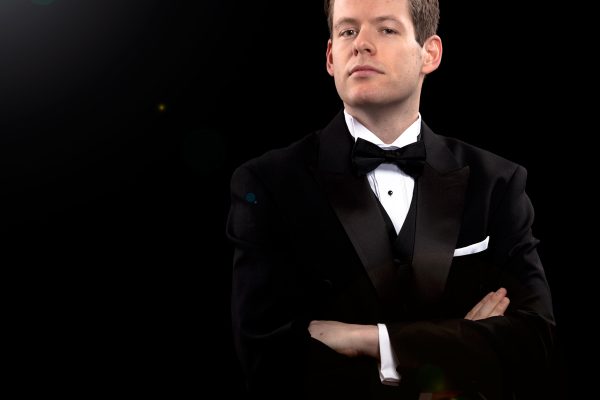 Immediately following the close of the premiere run in Toronto, Ted and Richard embarked on a national tour. They travelled from coast to coast with the show, stopping back at the Tarragon for a second run in the fall of 1996, and concluding in Vancouver in September of 1997 at the Vancouver Playhouse.

In October of 1997, backed by a team of producers including David and Ed Mirvish, 2 Pianos 4 Hands opened Off Broadway at The Promenade Theatre. The production was widely acclaimed, and ran for six months before transferring to the Kennedy Centre in Washington in the spring of 1998. Ted and Richard returned to Toronto later that summer and again played to sold-out houses, this time at the historic Royal Alexandra Theatre, with Mirvish Productions.

The show had its European premiere at the Birmingham Rep in the spring of 1999, a production that transferred later that fall to the Comedy Theatre in the West End of London.

Since then, Ted and Richard have twice reunited to perform in Toronto with Marquis Entertainment / Talking Fingers / Mirvish Productions, twice toured to Japan (presented by Shochiku), where they have performed in Tokyo and on tour throughout the country, and in 2011/12/13 embarked on a Farewell Tour that included visits to Toronto, Ottawa, Vancouver and Edmonton.

There have been many other productions with other actors, both male and female, in Canada and across the globe. Since its premiere, 2 Pianos 4 Hands has had 4,000 performances at 200 different theatres throughout Canada, the US, the UK, Japan, Australia, Hong Kong, South Africa, Austria, Finland and beyond. Nearly 2 million people have seen the play on five continents worldwide making it one of the most successful Canadian plays ever.

1997 – RAN FOR 6 MONTHS OFF BROADWAY AT THE PROMENADE AND THE VARIETY ARTS THEATRE. FEATURED IN MANY TOP 10 PRODUCTIONS OF THE YEAR LISTS, INCLUDING THE NEW YORK POST (CLIVE BARNES) 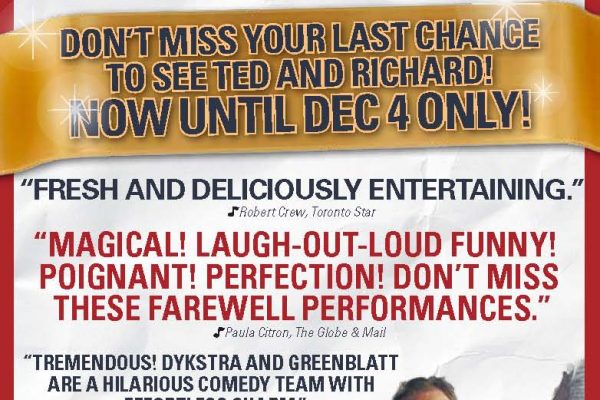 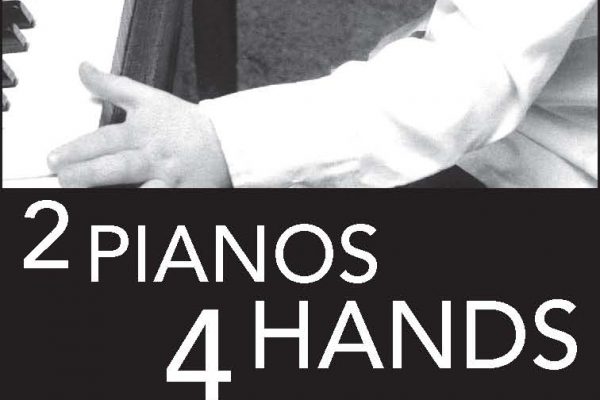 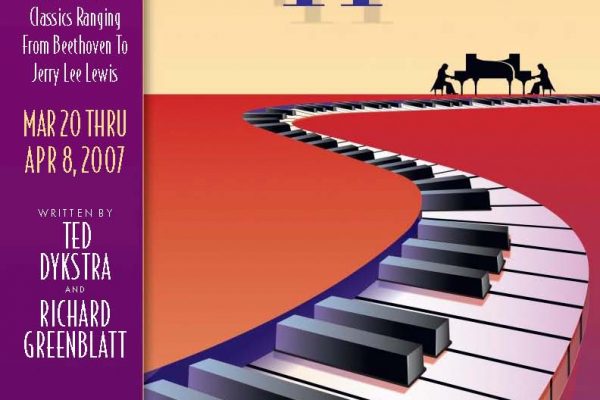 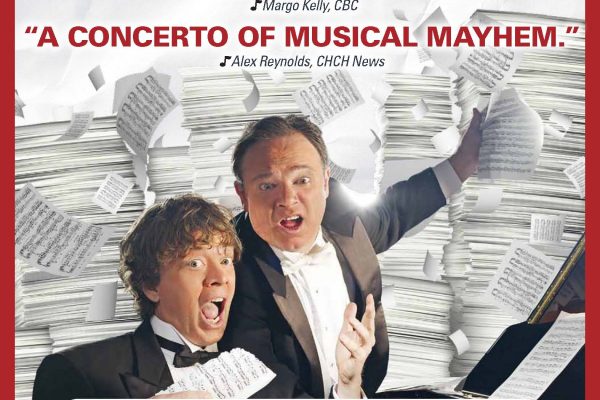